Extrusion Blow Moulding ( EBM ) can be used to process many different hollow plastic parts, from polymers including polyethylene, polyvinyl chloride, polypropylene and more.  Plastic is melted and extruded downward into a hollow tube (a parison).  This parison is then captured by closing it into a cooled metal mould.  Air is then blown into the parison, inflating it into the shape of the hollow bottle, container, or part.  After the plastic has cooled sufficiently, the mould is opened and the part is ejected and the excess plastic is trimmed from the neck and bottom areas.  Continuous and Intermittent are two variations of Extrusion Blow Moulding.

In Continuous Extrusion Blow Moulding the parison is extruded continuously and the individual parts are cut off by a suitable knife.  In Intermittent Blow Moulding there are two processes: straight intermittent is similar to injection moulding whereby the screw turns, then stops and pushes the melt out.

With the accumulator method, an accumulator gathers melted plastic and when the previous mould has cooled and enough plastic has accumulated, a rod pushes the melted plastic and forms the parison. In this case the screw may turn continuously or intermittently.  With continuous extrusion the weight of the parison drags the parison and makes calibrating the wall thickness difficult.  The accumulator head or reciprocating screw methods use hydraulic systems to push the parison out quickly reducing the effect of the weight and allowing precise control over the wall thickness by adjusting the dye gap with a Parison Programming Device.

Injection Blow Moulding (IBM) – The process of injection blow moulding is used for the production of hollow glass and plastic objects in large quantities.  In the IBM process, the polymer is injection moulded onto a core pin; then the core pin is rotated to a blow moulding station to be inflated and cooled.  This is the least-used of the three blow moulding processes, and is typically used to make small medical and single serve bottles.  The process is divided into three steps, namely injection, blowing and ejection respectively.

The Injection Blow Moulding Machine is based on an extruder barrel and screw assembly which melts the polymer. The molten polymer is fed into a hot runner manifold where it is injected through nozzles into a heated cavity and core pin.  The cavity mould forms the external shape and is clamped around a core rod which forms the internal shape of the preform.  The preform consists of a fully formed bottle/jar neck with a thick tube of polymer attached, which will form the body.  This is similar in appearance to a test tube with a threaded neck.

The preform mould opens and the core rod is rotated and clamped into the hollow, chilled blow mould.  The end of the core rod opens and allows compressed air into the preform, which inflates it to the finished article shape.

After a cooling period, the blow mould opens and the core rod is rotated to the ejection position.  The finished article is stripped off the core rod and as an option can be leak-tested prior to packing.  The preform and blow mould can have many cavities, typically three to sixteen depending on the article size and the required output.  There are three sets of core rods, which allow concurrent preform injection, blow moulding and ejection.

Advantages: It produces an injection moulded neck for accuracy.

Disadvantages: only suits small capacity bottles as it is difficult to control the base centre during blowing. No increase in barrier strength as the material is not biaxially stretched. Handles can’t be incorporated.

Want to know more or want us to provide a quote?  Please contact us

All machines are made and manufactured at Magic MP SPA in Italy – http://www.magicmp.it/en/ 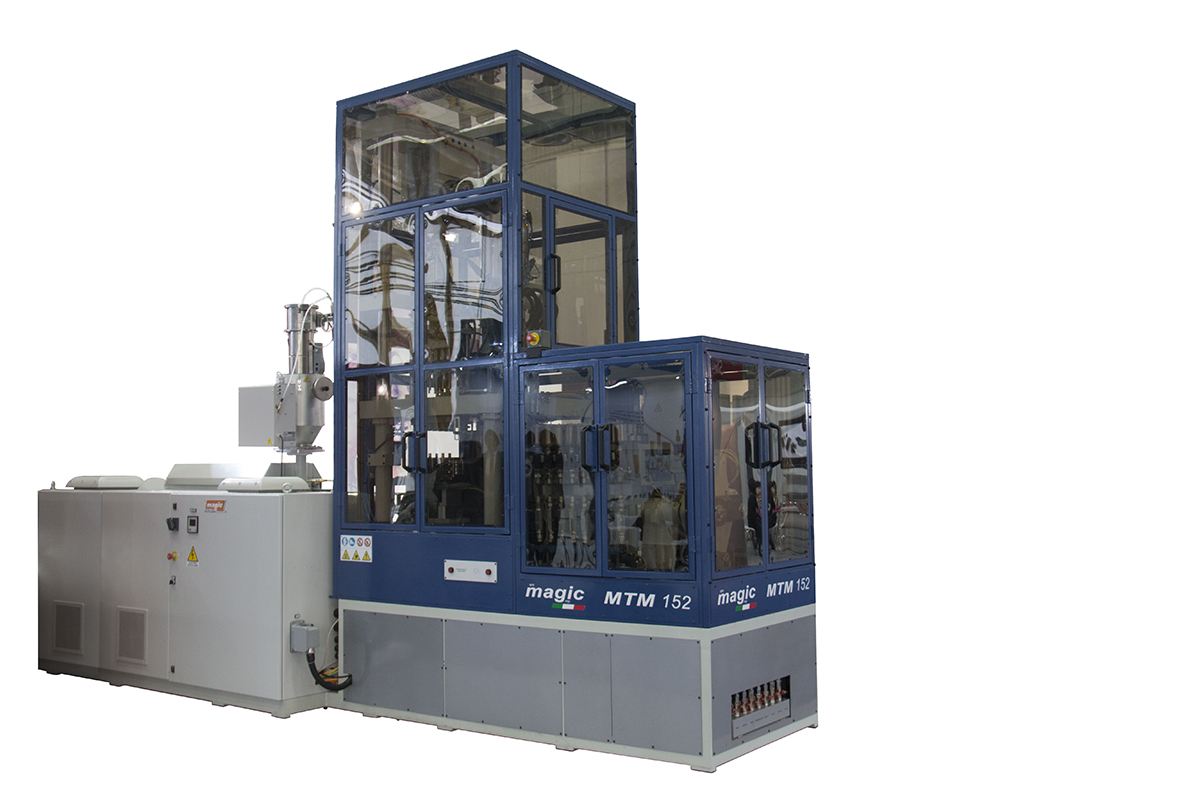 The machine has been carefully developed by our designers in order to meet the needs of our current and future customers, giving the opportunity to buy from us machines of simple concept, combined with an affordable price in relation to quality and technology offered through components and manufacturing totally made in Europe.

● Completely oil-free: it is just electro-mechanical and pneumatic.

● Considerable energy saving, thanks to the new design that allows to operate (considering the necessary pressure with very low power.

● Wide interchangeability of moulds and fixtures with primary producers.

● Noise level: very low, thanks to the full-electric technology. ● New operator interface, easy and intuitive to use (user friendly). 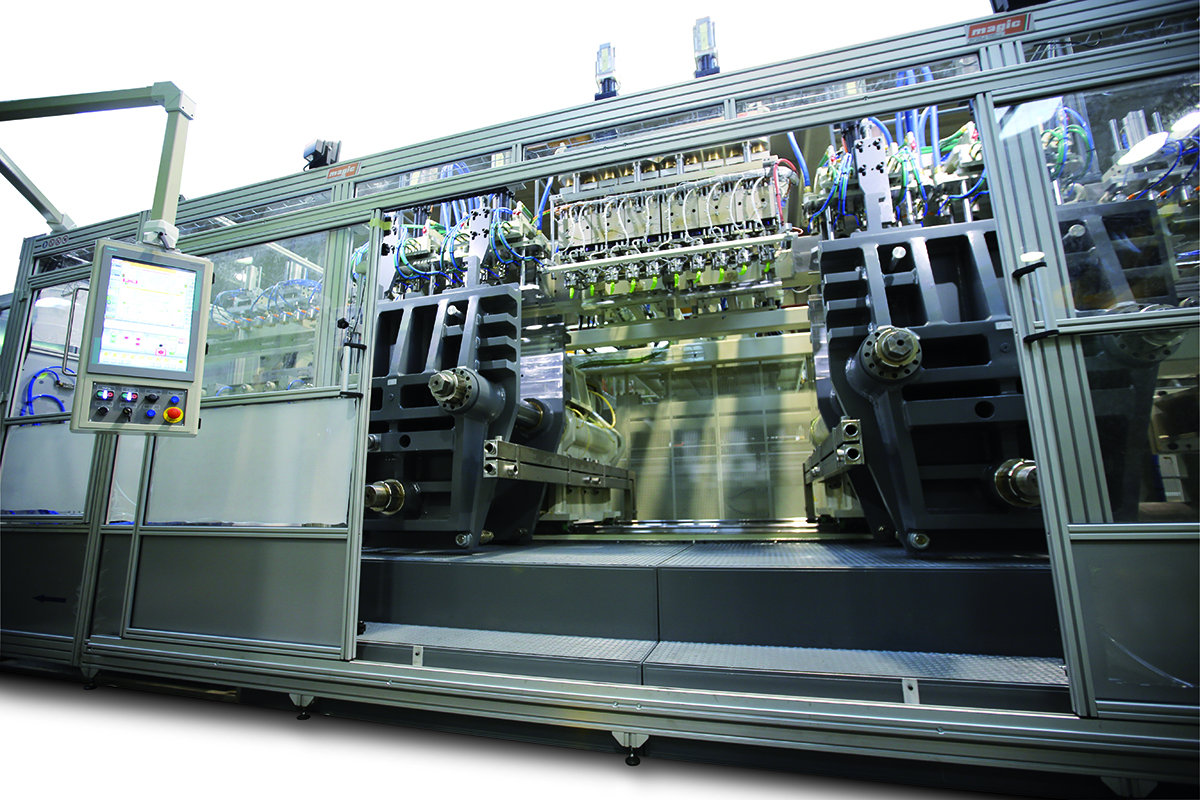 The series of the large ME machines is undoubtedly unique in the world, because for each model we have several versions available in order to meet customer’s needs, including machines with long-stroke (LS).  More than 15 years of research and development in the all-electric technology in order to achieve 500 kN of clamping force and long strokes up to 1400 mm, to run for example in 16+16 cavities with 75 mm centre-distance.  Entirely manufactured in our two plants (as for all our machines), confirming our tradition of having solid, and compact machines, reliable in the long run, with all sophisticated technical concepts coming from the experience made by MAGIC in more than 50 years of activity.

3. Customized solutions: several solutions available for what concerns components and options.  For example, deflashing on the mould, view-stripe, bottle pick and place robot, bottle control through integrated vision system, IML and so on.

Energy saving: it is on the medium/large machines that you mostly enjoy the reduced energy consumptions compared to the installed power.

There are several remarkable details in the design and manufacturing of our machines.

For example: all our ME machines are equipped with a patented device to recover the electric power during the braking phases.

In fact the energy accumulated in the braking phase of the motor is later regenerated and put back into the circuit.